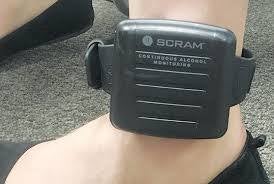 SCRAM has become a commonly used requirement in DUI related cases, whether it be as a condition of release pending the prosecution of a criminal charge, or as a sentencing requirement. SCRAM is an acronym for secure continuous remote alcohol monitor. This is a small electronic device which is placed around an individual's ankle and attached with a bracelet type connection. This device is designed to monitor the person wearing it to ensure they do not consume any alcohol. The device is designed in such a way as to be tamper-resistant so the person wearing it cannot break, cut or restrict its connection to the body without setting of an alarm to the monitoring service. The SCRAM device is able to test the person's alcohol content at least once an hour. Once the reading occurs, or when there is a tampering alert, the SCRAM device then notifies the person monitoring. The entire intent of the SCRAM Device is to deter the consumption of alcohol and monitor abstinence from alcohol to report to the Court.

The SCRAM device works by taking a test of secretions on the individual's skin (such as that from perspiration or sweat on the individual's skin). The SCRAM device detects insensible perspiration, or an invisible ethanol vapor that comes through a person's skin. Typically, only about of one percent (1%) of ingested alcohol is excreted through sweat. (This is not the same thing as a DUI Blood Test, or a DUI Breath Test. If you would like to learn about those tests, please click here).

In many cases, DUI defendants, or those arrested or charged with Driving under the Influence, do not have to wear a SCRAM device. However, a judge can Order SCRAM as a condition of pre-trial release. This is more likely to occur in a situation where someone has a documented history of alcohol abuse or dependency, or where the person has been arrested more than once for a drunk driving offense. Alternatively, a judge may Order a SCRAM monitor a condition of their sentence, usually for a period of time such as six (6) months or a year. Often, SCRAM is used as a way for serious DUI offenders to avoid jail, while the Court is still able to monitor their alcohol intake to ensure there is not a risk of recidivism or danger to the public. Typically, participants in the Las Vegas DUI Specialty Court program must wear SCRAM devices for a period of time. For more on DUI Court, please click here.

The length of time that an individual will have to wear a SCRAM device varies on a case by case basis. The judge may order a person to wear it for several months while attending counseling and therapy, or for the duration of his or her participation in DUI Court which can be three to five years. It is all up to the judge and different factors are taken into consideration.

In situations where a SCRAM device detects alcohol, law enforcement may be notified and this can lead to arrest for violation of the terms of SCRAM or a Judge may impose a suspended sentence which has been suspended. The same repercussions may happen if the device is tampered with or removed.

If you, or a loved one, has been charged with the serious crime of DUI, whether it be a misdemeanor or a felony, it is important to contact an experienced Las Vegas DUI Attorney as soon as possible. There are many important deadlines that have to be met, and pitfalls to avoid in the defense of a DUI case. If you have questions about SCRAM devices or are facing a charge where you may have to wear a SCRAM device, contact our office right away. Las Vegas DUI Attorney Josh Tomsheck has over a decade of legal experience. He has handled thousands of DUI Cases and has had favorable resolutions, where the charges have been reduced or dismissed entirely. For more on Mr. Tomsheck's case results, please click here. To schedule your consultation with Mr. Tomsheck, please click here.