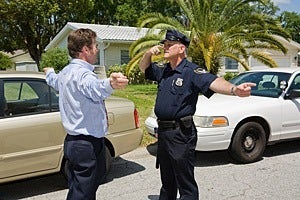 In Nevada if you have been convicted Driving under the Influence (usually called “drunk driving” or “DUI”), regardless of if it is in a Municipal Court or a Justice Court, you will have to successfully attend and complete DUI School. This is a typical requirement for first DUI Convictions and second DUI Convictions and is, in fact, one of the mandatory minimum requirements the Court MUST impose on every person convicted. In some cases, a DUI School will be done prior to a conviction for a DUI. This is often done in a situation where a case has been resolved as part of a plea agreement, sometimes referred to as a plea “deal,” where the Defendant completes DUI School (usually along with other requirements) in exchange for a lesser or reduced conviction than what the Defendant was originally charged with. In some cases, a skilled Las Vegas DUI defense attorney can work out a strategy of defense where the case is deferred, or “stayed,” while requirements including a DUI school are completed, and the case is reduced or dismissed after a certain period of time has passed. This can keep a DUI off a person's record, even if they have been arrested for the offense.

Unlike a jail sentence or a monetary fine, the DUI School is not meant to punish the Defendant, but rather educate him or her to make safer decisions about drinking and driving in the future. Nor is it the goal of the DUI School to scare the individual charged. The purpose is one of reformation rather than retribution.

It is important to remember that DUI School is different from DUI Court, which is a specialty court program sometimes available for repeat DUI offenders as part of their sentence. For more on DUI Court, please click here.

The DUI school can be attended in many different ways, including online, via correspondence or in person in a classroom setting. There are many different Court approved programs in Las Vegas and throughout Nevada where you can attend a DUI school. Typically, the DUI School's information is given to a criminal defendant following their appearance in Court, but an attorney knowledgeable in DUI cases can provide information about alternative locations and programs which may best fit your needs and schedule.

The DUI School for a first offense DUI conviction is typically eight (8) hours long. In some instances, the sentencing judge may order the defendant to complete a longer course, such as a sixteen (16) or twenty four (24) hour course. This is typically associated with a high blood alcohol concentration, or a different aggravating factor, such as a troublesome prior arrest history. The DUI School can typically be completed in one day and are usually held on the weekends from 8 am to 4:30 pm. If you complete the course online, the material will still span eight hours. The cost to attend DUI School can vary, but usually runs between $100 to $300 depending on the provider and style selected or assigned.

DUI school is composed of lectures, class discussions, class exercises, video presentations and a final exam. The final exam must be passed in order for the requirement to be “completed.” In Las Vegas Justice Court, the sentencing judge usually gives a Defendant ninety (90) days from the date of being sentenced, or the case being negotiated, to complete this requirement and others. If there are special circumstances, such as multiple additional requirements or financial difficulty, the Court may allow a longer period of time to complete the requirements. In City, or Municipal Courts, the time to complete this requirement may be longer, as there is usually an associated time period where the Defendant is required to “stay out of trouble” before the case can be closed. The Court will need to make sure that all of the requirements a defendant was sentenced to, including the DUI school, were completed before a case can be reduced as part of a plea negotiation and/or closed. This is usually done at a “status check” in Court. In most cases, when a Defendant has completed the DUI school and all of his or her other sentencing requirements, a Las Vegas DUI lawyer can appear on behalf of the Defendant, who will likely not have to be present in Court. It is very important that you communicate with your lawyer and provide proof of your completed requirements so that your position can best be presented in Court. It is also a good idea to be proactive in taking classes or completing requirements and not waiting until the last minute. This shows a “good faith effort” in adhering to the Court's instruction and avoids unforeseen difficulties that can complicate a previously entered negotiation.

While a DUI School is very serious and can be costly, it is important to remember that hiring an experienced Las Vegas DUI attorney will almost always work in your favor. If you hire Attorney Josh Tomsheck in the early stages of your case, it may be possible to get your charges reduced or dismissed so that you never have to attend a DUI School, or the use of a DUI school as part of a negotiation that doesn't have a lasting impact on your life going forward. Mr. Tomsheck has handled hundreds, if not thousands, of DUI cases. Past clients who have retained him have had their DUI charges reduced to lesser offenses, such as a minor moving violation or reckless driving, and in many cases, complete dismissals of all charges. It is important to note that being arrested for a DUI is not the same thing as being convicted of a DUI. Contact him here for a free consultation.